I have begun the process of transcribing the pension file for William Smith of Russell County, Kentucky to see if I can find a connection with my family: my grandfather Herman Smith > Oliver Houston Smith > Elias Smith > George A Smith > John M. Smith.  My plan is to make a timeline of this man’s life and use it as a “map” to look for records for John M. Smith.  This is more “shot in the dark” researching than anything as the only thing that I have to connect these families is the common surname of Smith and location of Russell County.  I decided to post this on my blog so that if there is another Russell County researcher looking for information on this family, they might benefit from this transcription.

On this 2nd day of November 1832 personally appeared before the Honble  John L Bridges sole Judge in and for the circuit aforesaid (now seeing) William Smith a resident of the County of Russell state of Kentucky age 76 years who being first duly sworn according to law doth on his oath make the following Declaration in order to obtain the benefit of the provision made by the act of Congress passed the 7th Jun 1832 That he entered the service of the (united) under Capt Joshua Powel as a drafted militia man in the month of (blank) in the year 1780 in the County Amelia state of Virginia he was marched on to Richmond from there to North Carolina scouting about after the tories he was not marched to any regular troop during this tour they were occasionally joined by other militia companies but the time has been so long he does not recollect their names he served faithfully three months being the time for which he was drafted he was then honorably discharged and returned home, and after some time he was again drafted for three months and again entered the service under the same Capt and was principally engaged after the tories the first part of the tour being marched on to Carolina still under the command of Capt Powell after a part of the time he returned to Virginia and was attached to a part of General Lawsens Brigade he does not recollect the officer who commanded but they were detached of and had a severe engagement near Charlotte Courthouse.  This was the only battle he was in he served out the full term of his engagement 3 months and was discharged __ after being at home a short time was again drafted for three months and entered the service under the same Capt and was marched on and joined General Washington’s army near York where he remained until after the surrender of Cornwallis he recollects of no important event other the surge of York the surrender of Cornwallis he was with the army from the time he first (formed) until nearly the time his service ended he was marched on homeward & his term expired and he was discharged his first tour was in the year 1780 he thinks about April the second and third  in the year 1781 but does not recollect the months which he so entered except the first he further states that he did not receive a written discharge for either of his tours His Capt was his neighbor and supposes from that circumstance it was thought unnecessary nor has had any documentary evidence of his service nor does he know of at this time any person by whose testimony he can establish the same. He was born in the Amelia County state of Virginia on the 5 day of May 1756 according to the statement of his parents tho he has no register of his age but he doubts not the correctness of his parents statement he remained in Amelia he does not recollect the precise time but moved from there to Halifax County Virginia where he remained until 1810 when he moved to Kentucky and settled in Cumberland County where he remained some time then moved to Pulasky same state and after many years residents there moved to Russell where he now lives he hereby relinquishes every claim whatever to a pension or annuity except the present and declares his name is not on the pension roll of the agency of any state sworn to and subscribed the day and year.

(I had originally posted this blog on February 7 and within hours, received a packet of information in the mail that changed the ancestor I was going to research.  So I removed the post to take some time with the new information.  I now feel confident that the information I received was wrong, so I’m moving forward with my original plan.)

I’m always surprised that no matter how thoroughly I think I’ve read some document, I always seem to find something new whenever I transcribe it or even when I try to plug information into some new format like a timeline.

I have confirmed my Smith line back to John M. Smith who died in Russell County, Kentucky in 1835.  Some researchers claim that John was a soldier in the Revolutionary War, but I can find no records that would prove this.  There is a William Smith who DOES have a pension file from Russell County, Kentucky.  So can I connect these two men? Normally, we research backward through time.  But since I can’t seem to get from John to William, can I try to work forward and prove that John is a son of William?

So far, I’ve had no luck with that.  Basically, I have 4 records or record types to rely on.  The pension file itself – which is 73 pages long, the will, tax records and deeds.  And I feel that I’ve found an amazing amount of information from those things, but so far, no connection.  But I’m not ready to say that John was NOT William’s son.  So I’ve decided to start transcribing and if I’m going to take the time to do that, then I’m going to post it on my blog!

So I don’t know how often they’ll appear, but they will appear!  And of course, I’m sure I’ll have plenty of commentary to add as well!  I’m going to start a “William Smith” category so that if anyone is interested in following the conversation, you can always click on that to see the entire progression.

So I’ll start with the card in the front of the Pension File. 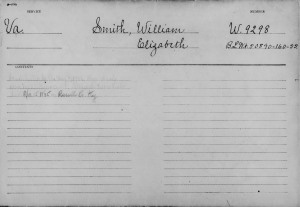 Later in the pension packet, a summary letter written to a researcher says that several different dates of marriage were given: Oct. 16, 1787, 1790 November 8, 1792 or 1793 and I’m sure that’s part of the unreadable stuff.

This little card has parts that are very clear and easy to read.  The words under the “contents” are very faded and difficult to read.  I opened it in Photoshop and did what I could to read those words, and most were not difficult, but others would not come through. 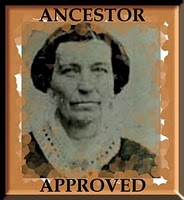