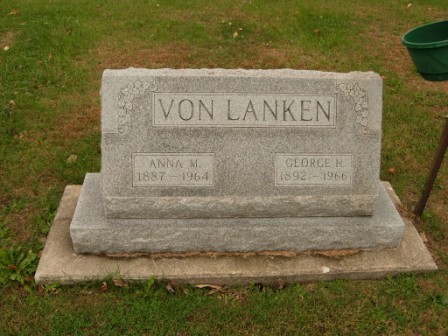 George VonLanken was born Apr. 19, 1892 in Douglas County, Illinois.  He was the 5th child of Heinrich VonLanken and Maria Heit.  Heinrich (Henry) had come to America at the age of 12 and moved with his family directly to Douglas County.

George married Anna Marie Klink on Jan 12, 1911 in Douglas County and remained there to raise their 5 children.  George passed away in Douglas County on Feb. 22, 1966 and is buried next to his wife in Zion Cemetery.

Henry and Mary VonLanken and family 1905

I recently signed up to attend the 2009 National Palatines to America Conference at the Allen County Public Library.  While I have not taken any of my own actively researched lines back to immigration, every SINGLE line of my husband’s side came from Germany.  I have done quite a bit of research on a French/German Alsace line that my husband has, but my lack of knowledge about ANYTHING German has kept me from researching his lines further.  I decided that I’d better take some time to make sure that I have all relevant information organized and cited to make the most use of my research time there.

As I’ve been putting together timeline format notes for all of the VonLanken line, I’ve become quite frustrated over the lack of an 1880 census for this family.  They arrived in New York on Mar. 30, 1870 and I have the 1870 census and the 1900 census, but I cannot find the 1880 census.  The VonLanken family seems to have gone directly from the ship to Douglas County, Illinois and every single life event for this family is found there right up to burial.  So why can’t I find the 1880 census?  The fact that the 1890 census doesn’t exist means that I have a 30 year gap between census information, which really irritates me!  (I suppose in the grand scheme of genealogy research, this is a tiny thing, but the type A personality in me is really steamed!)

In the 1870 census, Henry and his family lived next door to another VonLanken family.  I have no idea of the relationship, but I think it could be key in taking this line back further.

In 1881, Henry VonLanken married Mary Heit in Douglas County.  7 children were born to them between 1882 and 1900.  Two additional children were born after 1900 census.  The picture at the top of the page of Henry and Mary’s family was taken around 1905.  The young man in the back row on the left end is my husband’s great-grandfather, George VonLanken.  The family continued to grow, as evidenced in the following picture.  My husband’s grandfather, Ervin,  is seated in front on the floor in a white shirt.